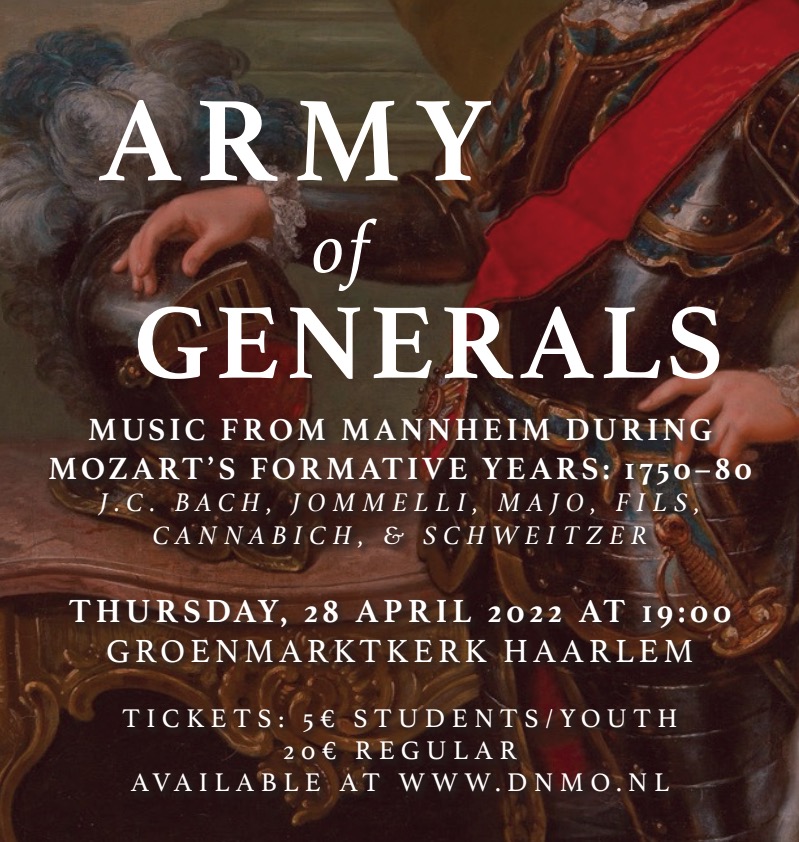 Das Neue Mannheimer Orchester is proud to announce a tour in the Netherlands which sheds light on the golden age of music in Mannheim and Schwetzingen during the formative years of Mozart from 1760–80. The namesake “Army of Generals” comes from a quote by English musicologist Charles Burney, who visited Mannheim in 1772 and wrote: “There are more solo players and good composers in this, than perhaps in any other orchestra in Europe; it is an army of generals, equally fit to plan a battle, as to fight it.”

While Mannheim today is a relatively typical industrial city in southwest Germany, as the former capital of the Electorate of the Palatinate, it was regarded in the 18th century as a new “Athens on the Rhine.” This was due in part to the efforts of its ruler, Karl Theodor, who, unlike his many contemporary rulers who invested their treasury in war-making and territorial expansion, invested heavily in arts, culture, and sciences in this new golden age. Karl Theodor’s orchestra was comprised of excellent virtuosos who performed as soloists in Europe’s musical capitals. Leading figures such as the long-time concertmaster Christian Cannabich and the cellist Anton Fils, a fine symphonist who died extremely young, excelled as composers and brought out in their works the advantages of the orchestra, which seemed to others, such as Johann Christian, the youngest of the Bach sons, like a musical arcadia. One of Johann Christian’s most ardent admirers, Wolfgang Amadeus Mozart, namely sought employment in Mannheim based on its legendary reputation, but was ultimately unsuccessful at securing a position. Anton Schweitzer’s successful opera Alceste saw its best performances here. Niccolò Jommelli, a celebrity during his lifetime, retooled his Arcadia conservata for Schwetzingen. A visit so inspired Francesco di Majo that he wrote the opera Alessandro for Mannheim.